TORONTO — They came from two different corners of the world and put in the two best showings on the bench at the CFL Combine, presented by New Era.

Noke Tago, a d-lineman from Samoa that played his college football at Oregon State, took the top billing among Global players with 30 reps on the bench, just inching himself ahead of Latvia’s Karlis Brauns. The easily-noticeable d-lineman with dyed pink hair rattled off a very smooth 29 reps and held a brief lead in the event until Tago took the stage in Toronto.

With Global prospects being measured first in events on Saturday, many watching might have expected the National players to eventually push Tago and Brauns’ numbers to the side. “It’s not my first rodeo in front of scouts. I’m used to it,” Tago told CFL.ca’s Marshall Ferguson and Henoc Muamba after the bench press event was complete.

“I’m not satisfied yet. I’ve still got a long way to go, I have so much to prove. When I got on that bench, I just let everything go (and) in my mind, it goes to do what you can do. And then just let God do the rest.”

Bryant University running back Daniel Adeboboye was the top-performing National on the bench on Saturday, with 28 reps. McMaster’s Enoch Penney-Laryea was right behind him with 27 reps. There was a three-way tie behind him at 26 reps, going to a pair of Saskatchewan Huskies d-linemen, in Riley Pickett and Nathan Cherry. Laval o-lineman Cyrille Hogan-Saindon joined them. 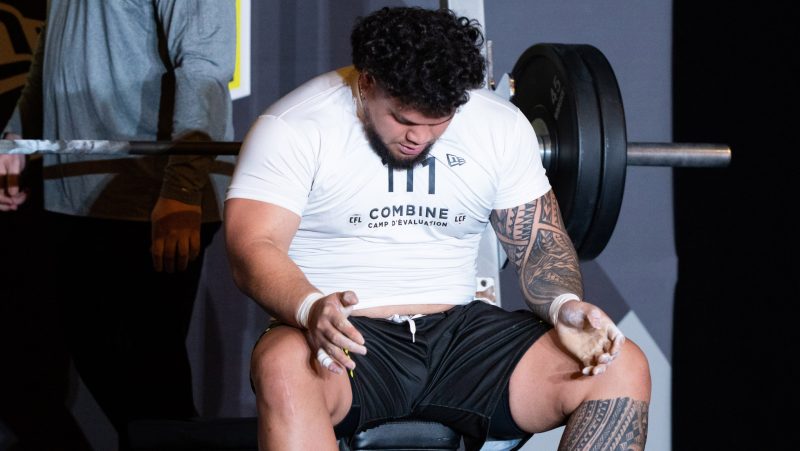 Noke Tago came to Toronto without telling his family that he was taking part in the CFL Combine Photo: Kevin Sousa

While he spoke with Ferguson and Muamba, Tago revealed that his family back home wasn’t aware that he was in Toronto, looking to find his way to a CFL roster.

“The fun thing about this, none of my family knows about it,” he said.

“I don’t want to disappoint them. I’m doing this for me this time, so I want to see the outcome of this. I’m excited. I’m excited about it.”

While teams across the CFL have some familiarity with the Global prospects in the draft, strong performances like the ones Tago and Brauns gave on Saturday will certainly help their causes as they seek to be taken in the Global Draft on May 3, a few hours before the National Draft.

Next, they’ll look to a grind of a day on Sunday, where they’ll take part in speed testing and the all-important one-on-ones. Tago didn’t want to talk about any go-to moves against opponents and only promised that we’d see on Sunday what he had in store. He knows that a second day of strong performances should lead to a team calling his name in May’s Global Draft.

“I’ve been working so hard for this. There were times that it’d kind get dark in the tunnel, you know where I’d feel like, I’d think this is it, I’m done playing football, it’s time for me to hang it in. There’s always that noise in the back of my head (saying) ‘You’re not done yet.’ It’s going to mean so much to me.”

Read the original article in CFL.ca.