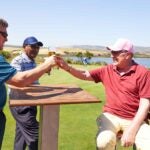 The Rules of Golf are tricky! Thankfully, we’ve got the guru. Our Rules Guy knows the book front to back. Got a question? He’s got all the answers.

A member at our club made an ace, then called a penalty on himself, claiming he teed the ball ahead of the marker. All this to avoid paying for drinks after the round, when tabs have reached $2,000. Was this legal? —John Karam, St. Petersburg, Fla.

The thrill of victory and the agony of… the bar tab.

Let’s say this occurred in match play. Under Rule 6.1b, which covers playing from inside the teeing area, the opponent gets to choose whether to cancel Mr. Cheap Ace’s stroke, so if that opponent prefers a free drink and losing the hole, so be it — don’t cancel the stroke and the hole in one stands.

In stroke play, once the player has called the penalty on himself, he gets two penalty strokes — but remember, the stroke into the hole now doesn’t count and the player has to correct the mistake by playing from within the teeing area (as opposed to “That’s a 1 with a 2-stroke penalty for a 3”).

If he doesn’t correct the mistake, he’s disqualified. Some might argue that a player calling a penalty to gain an advantage is antithetical to golf’s spirit, and the Committee could go the DQ route via serious misconduct under Rule 1.2a.

But the game of golf assumes honorable golfers and takes them at their word, unless there’s hard evidence to the contrary. Suspicions aren’t facts, and the “advantage” here is purely financial, not competitive — quite the contrary, since he has cost himself strokes. Maybe it seems a bit naive, but Rules Guy, for one, prefers it that way, even if it means paying for his own single-malt Scotch at the 19th hole.

Need help unriddling the greens at your home course? Pick up a custom Green Book from 8 AM Golf affiliate Golf Logix.

Got a question about the Rules? Ask the Rules Guy! Send your queries, confusions and comments to rulesguy@golf.com. We promise he won’t throw the book at you.