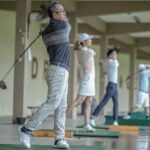 A Top 100 Teacher shares a useful tip that’s applicable to all golfers.

Top 100 Teacher Dana Dahlquist looks after the swings of some of the biggest names in men’s and women’s golf, including Beau Hossler and Charles Howell III. But while the majority of his time is spent catering to top-level talent, he also has a stable of recreational players who benefit from his expertise, too.

On this week’s episode of Off Course with Claude Harmon, Dahlquist revealed one piece of advice that he feels is applicable to every player, regardless of their ability.

“I think the No. 1 thing is, have a plan and be consistent,” Dahlquist said. “It doesn’t matter the technique, necessarily. There’s a lot of different ways to get it done. But if you’re consistently practicing, not just going to the range with a 7-iron and hitting that, but have a plan. What you’ll notice is, when you go out and play, that plan, if you execute it, will produce lower scores.”

Dahlquist said that, of the 120 high schoolers that he sees practicing on the range over a given week, only about 5 percent of them will be shooters by the time they graduate. Why? Because that’s the number of kids who take lessons, and also practice in between.

“They’re not just hitting 7-irons and drivers,” Dahlquist said. “They’re doing some putting, they’re being well-rounded with their chipping, they’re playing. They’re also jumping in to a little bit of competition. That competition makes them more at ease when they go play a regular round of golf.”

The improvement cycle for the high schoolers to reach scratch is a span of four years, but Dahlquist said it could be 10 years for older adults.

“You can run the same formula,” he said. “You just have to be consistent, take some lessons with your local pro, and don’t bounce around. Don’t be a PGA Tour player and bounce around. Just stay with what you’re doing.”

For more from Dahlquist, including why perfect golf swings don’t always elicit results and what the first coaching session with an elite Tour player is like, check out the full interview below.

As a four-year member of Columbia’s inaugural class of female varsity golfers, Jessica can out-birdie everyone on the masthead. She can out-hustle them in the office, too, where she’s primarily responsible for producing both print and online features, and overseeing major special projects, such as GOLF’s inaugural Style Issue, which debuted in February 2018. Her original interview series, “A Round With,” debuted in November of 2015, and appeared in both in the magazine and in video form on GOLF.com.