The 2021 WNBA season has come to a glorious end, with the Chicago Sky winning the championship for the first time in franchise history. For the 10th edition of 12 Questions, I’ll take a look back at the WNBA Finals as well as the season in general. If you’ve been following this column, you know the drill. Every other week, I address questions about the WNBA, teams and individual players, while providing the best possible answers based on advanced stats, game results, stat lines and gut feelings. Accept. Disagree. Discuss. That’s what makes talking about the WNBA fun. And I plan on continuing writing 12 Questions for the 2021-22 women’s college basketball season.

1. How did the Sky pull off the WNBA Championship run after finishing the regular season .500?

The Sky were a much better team than their 16-16 record indicated. In the beginning of the regular season, they were searching for team chemistry, dealing with injuries (particularly to team leader Candace Parker), turning the ball over, and shooting poorly. But after a tough seven-game losing streak, Chicago reeled off seven straight wins and started piecing everything together. As a team, the Sky cleaned up turnovers, shot the ball better, and mastered the art of turning defense into offense with a deadly transition game. In the playoffs, they held teams to an average of 75.8 points per game, and led all teams in shooting percentage with 46.8 percent from the field. In the end, Chicago peaked at just the right time and was rewarded with the WNBA championship trophy.

2. What can the Phoenix Mercury take away from their playoff run?

The Mercury may have lost in the finals, but their overall season could be deemed a success. Both Skylar Diggins-Smith and Brittney Griner made the All-WNBA first team, and Griner finished second in the MVP race. Diana Taurasi has shown no signs of slowing down, even as she played with an ankle injury and a broken bone in her foot throughout the entire playoffs. The Big Three are jelling and that’s going to carry over to next season, should Taurasi return (prediction: she will). Where Phoenix needs to improve is depth, which was a glaring issue in the finals against the Sky. Diggins-Smith, Griner and Taurasi were the only Mercury players to average double-figures in points in the playoffs, and they need additional scoring help from role players. That’s something they can and should address in free agency.

3. What was the biggest surprise of the 2021 WNBA playoffs?

I still have trouble wrapping my head around the fact that the Connecticut Sun were rolling over teams for the last month and a half of the season and ended up laying an egg in the playoffs. Granted, they faced a Sky team in the semifinals that was playing extremely well. Still, the Sun may have hit their stride too early, or lost some of that regular season synergy while waiting for the double-bye to pass before the semifinals. I also think inserting Alyssa Thomas back into the lineup created some unforeseen chemistry issues. It was an asset to have Thomas back, of course. But the Sun had gotten into a rhythm of playing without her. I don’t think there was enough time for them to readjust. Either way, facing the Sky in the semifinals was the worst-case scenario. Chicago had the length and depth to match up with Connecticut, as well as the offensive punch to knock out the Sun.

4. Are the Sky the front runners for next season?

As the reigning WNBA champions, yes. This is the Sky team that was expected to dominate in the regular season, especially with Parker in the mix. It took some time to come to fruition, but Chicago figured it out at the perfect time. The only issue is free agency. Courtney Vandersloot, Allie Quigley, Stefanie Dolson, Astou Ndour-Fall and Kahleah Copper are all unrestricted free agents. It will be interesting to see how this plays out and if the Sky will be able to keep its core group together under the salary cap.

5. What was up with the postgame media conference or lack thereof?

The Mercury declined to participate in the postgame conference after the loss. Head coach Sandy Brondello was the lone Phoenix representative. As for Chicago, the champs were understandably focused on celebrating their win, though they did take part. Either way, it’s important for those covering the league to have access to teams, coaches and players after a win or a loss, especially in the finals. It’s how stories get written and coverage gets shared. And it can’t happen without media involvement. But after the way this unfolded, I wonder if we need to rethink postgame conferences in general after a championship? Let the winners enjoy the thrill, and let the team that lost digest the disappointment. We are so quick to judge player reactions right after the game ends (including Taurasi’s reported slamming of a locker room door, causing it to crack). Maybe there should be some time in between. 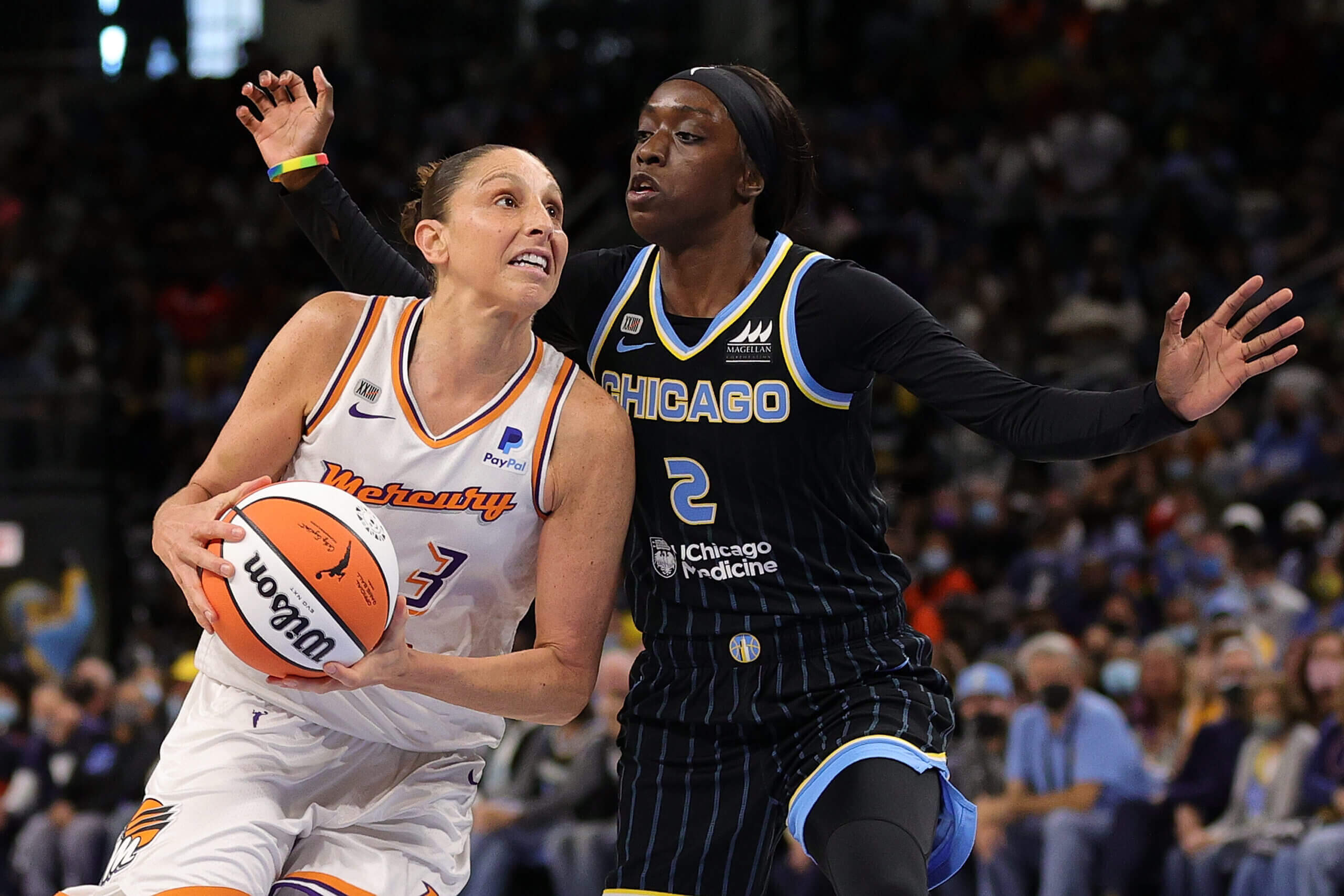 6. Looking back at the 2021 regular season, what stands out the most?

This was a great WNBA season all around, full of incredible play, storylines, rivalries, buzzer beaters, dominating teams, underdogs, etc. I could write an entire column on all the different aspects I enjoyed about the regular season and playoffs. But what stands out the most to me is the increased presence of the WNBA within the world of sports. For the past five seasons, the league has been growing viewership and coverage. But this season, it felt as if it reached another level. From the new Nike jerseys to player visibility on social media to showcasing more games on national television to mainstream media coverage during the regular season, the WNBA is getting the attention it deserves.

The Minnesota Lynx and Dallas Wings stand out to me the most. The Lynx overcame some preseason/early injuries and a poor start to finish third overall in the standings. Despite everything Minnesota dealt with this season, it found success. The Wings are a young and talented team that need time to grow. But they made the playoffs for the first time since 2018 and went toe-to-toe with some of the best teams in the league. They have plenty to build on.

8. Which teams failed to live up to expectations?

While the Washington Mystics weren’t necessarily expected to vie for the championship, making the playoffs was well within reach — especially with Tina Charles leading the league in scoring and playing as well as she did. But without Elena Delle Donne and a fully healthy roster, they weren’t able to put together enough wins down the stretch. The Sun and the Las Vegas Aces had dominant regular seasons, finishing first and second overall, respectively. After losing in the 2020 finals, the Aces were focused on winning the championship this season. The Sun had all the pieces in place to win a championship of their own — a 14-game win streak to close the season, multiple players on the first and second All-Defensive Teams, Coach of the Year (Curt Miller), Most Improved Player (Brionna Jones) and the MVP (Jonquel Jones). I think it’s safe to say that both the Sun and the Aces fell short of expectations in the playoffs.

9. How can the WNBA build off of the increased momentum and viewership of the 2021 season for next year?

I think when the Board of Governors meets to discuss the 2021 season, they have a lot to be excited about the future. There are some things that need to be addressed, of course, such as where the league stands with expansion, the possibility of reformatting the playoffs, and — after Taurasi pushed a referee and received a fine instead of a suspension — reworking some of the player rules. But overall, this season was a success. After taking stock of the viewership numbers, adding more games to the national television schedule would be beneficial. Increasing player jersey availability and overall merchandise is a must. Also, figuring out a way to keep the WNBA relevant during the offseason is key.

When is Taurasi not the villain? It’s a role she seems to relish, though she would prefer to be called “competitive.” But honestly, I don’t think she cares either way. Taurasi has always been focused on winning and I doubt she regrets anything about her actions in the regular season, playoffs and finals. She’s always been physical, vocal, emotional and cocky. That’s who Taurasi is, and at age 39 and after 17 seasons, she’s not going to change. She’s the kind of player who feeds off of narratives like this, but if anything is going to motivate her it’s coming up short in the finals and losing out on a fourth WNBA championship. She hates to lose.

11. Which players currently entering free agency have most increased their contract value this year, aside from the big names?

Kahleah Copper, for one. After a solid regular season and an even better playoff performance, Copper finished the season as a WNBA champion and finals MVP. She’s going to have suitors across the league, but even if she decides to stay in Chicago it’s going to cost the Sky. Sophie Cunningham most certainly increased her value during the playoffs, hitting big shots and swinging momentum for the Mercury. I could see her wanting to stay in Phoenix, but she’s definitely going to be fielding offers from other teams.

12. What are your thoughts on the Atlanta Dream hiring Tanisha Wright as head coach before hiring a general manager?

Usually, a team hires a general manager first. Then, the GM weighs in on who to hire as the head coach. But the Atlanta Dream, known for bucking convention, hired former WNBA player and assistant coach Tanisha Wright to take over as head coach. The Dream needs a leader who understands player dynamics, and who can manage the strong personalities that make up the roster. With Wright’s experience as a player and an assistant coach, she’s a good fit. In the WNBA, some head coaches also serve as GM and that may be something Atlanta is considering as an option for Wright as well. Either way, this is the right hire and step forward for the Dream.