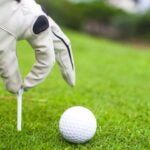 Does a tee pass as a ball marker?

During a recent round at a prestigious club on Long Island, a golf writer who shall remain nameless was gently rebuked by his caddy after marking his ball on the green with a tee.

“Here, use this instead,” the disapproving looper said, handing his man a traditional ball marker.

The writer was embarrassed.

He was also uncertain: had he really been out of line?

Officially, no. Under the Rules of Golf, any number of artificial objects—a coin, the toe of your putter, the tab of a beer can—may be used to mark your ball. The key word being “artificial.” Using a natural object, such as a leaf or a twig, is a violation. It’s considered improper marking, and it carries a one-stroke penalty.

A tee, though? No problem, the governing bodies say.

But rules are one thing. Label is another.

And under the game’s unwritten codes of conduct, our unfortunate golf writer was indeed in the wrong.

As with so much else involving social niceties, context matters. In a casual round with friends, there’s nothing wrong with employing a tee in a pinch. (Nor is it bad for the turf, so long as you don’t twist and turn the tee, tearing up roots.) As far as the Etiquetteist is concerned, in fact, you can use pretty much any object in a laidback outing — your foot, an acorn cap, a piece of lint — so long as your playing partners aren’t distracted by it. It’s easy enough to ask them. And you should.

Whether it’s smart to use a tee is a separate issue. If you’re playing for money, you may not want to use a tee when marking inside your opponent, as that tee could serve as a kind of guidepost, helping your adversary find the proper line. But with nothing at stake, there’s no real downside to using a tee unless it bothers someone in your group, which is unlikely.

A casual round with friends, though, is not the same as playing as a guest. When you’re on someone else’s turf, it’s incumbent upon you to be on your best behavior. You don’t want to ruffle feathers. You need to read the room. And let’s face it: at certain clubs, especially old-guard redoubts like the one our writer friend was playing, codes of conduct can be rigid. Mark your ball with a tee, and you should know that the gesture might be seen as tacky or disrespectful, like wearing your cap backwards or leaving the tail of your shirt untucked.

Are such codes of conduct stuffy and irrational? Maybe so. But that’s not the point.

Can’t live with them? Don’t accept the invite. Stick to playing with pals at your home course, where you’re free to mark your ball with earwax if you’d like.

The Etiquetteist promises not to say a word.