AUSTIN, Texas — Jesse Mueller’s idea of ​​the perfect anniversary gift was heavy, time-consuming and required a little elbow grease. And his wife, also named Jessie albeit with a different spelling, wouldn’t have had it any other way.

Just a few days after celebrating his 12th wedding anniversary, the Arizona State University product and golf director at the Grand Canyon University course enjoyed a perfect Wednesday stroll around the grounds at picturesque Barton Creek Resort and Spa. He did so with his wife hauling his clubs around in the fill-in role of caddy, something she did for four days because her husband needed a helping hand.

And Mueller, who held a five-shot advantage heading into the final round of the PGA Professional Championship, did nothing to compromise his comfortable lead during Wednesday’s final round, finishing with a ho-hum 74 to take the title and one of 20 berths into the PGA Championship at Southern Hills in Tulsa, Oklahoma, next month.

Mueller’s story is familiar — after a stellar high school at Red Mountain High School in Mesa, Arizona, and a college career at ASU, he kept grinding through a few years on minor circuits and mini-tours, with a dozen-and-a- half starts on the Web.com Tour sprinkled in.

He said his appreciation for the game has never wavered, but the weight that’s been lifted by his jump into course management has allowed him to enjoy the game a bit more.

“Some of the pressure’s off. It’s not my livelihood to play, so it’s more of a bonus,” he said. “I’m still working on it, practicing, but I might be a better player now than I was when I was playing full-time.”

Mueller — who became the first Southwest Section champ in the tournament’s history, dating back to 1968 — used an impeccable short game to build a big advantage, and while his chipping wasn’t as flawless in Wednesday’s final round as it had been earlier in the week, he managed to pull a few more key shots out of the bag. 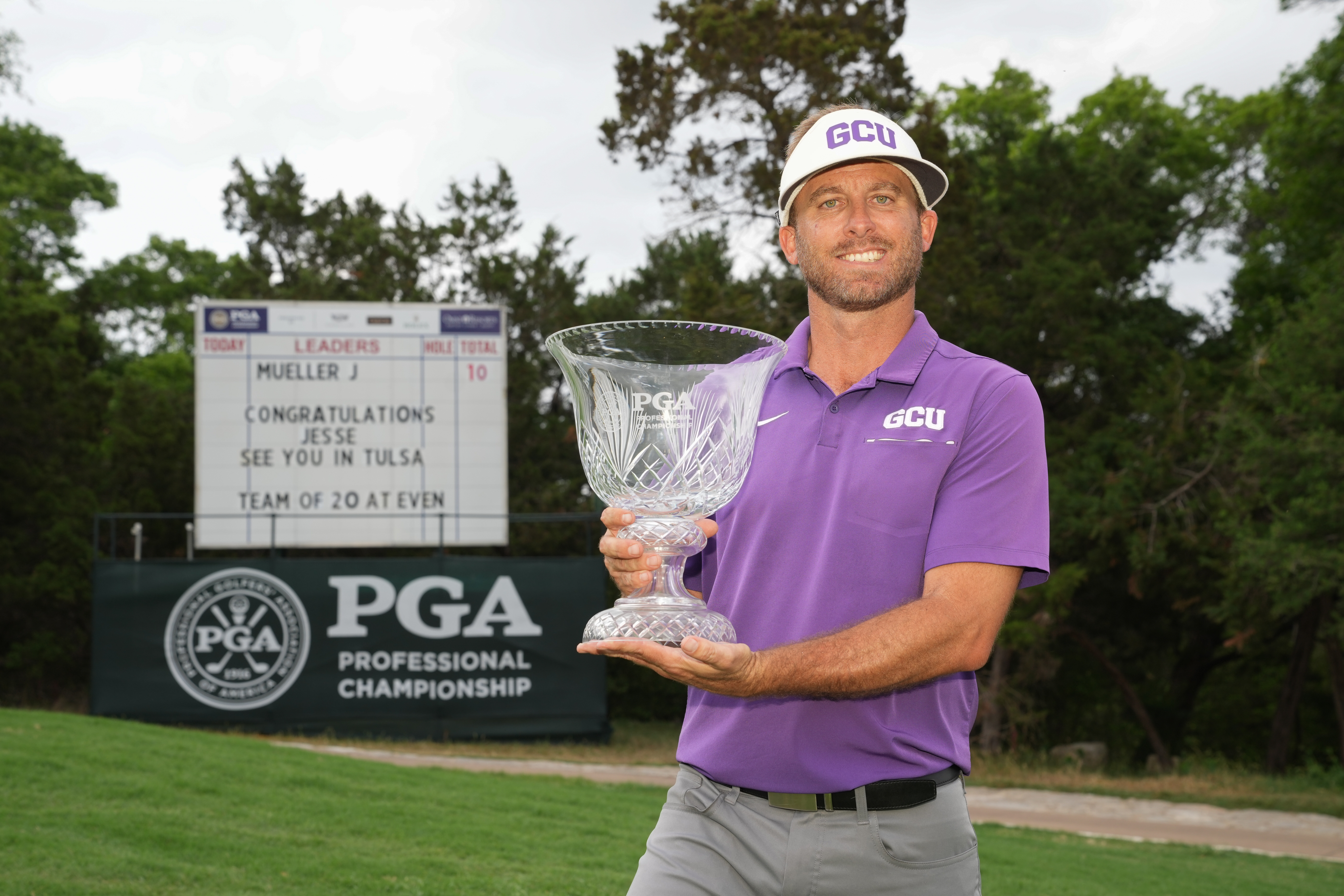 For example, Mueller saved by on No. 14 with an exquisite chip to a few inches that kept the lead at five strokes.

“On the first three days, I could not have chipped any better,” he said. “I chipped in three times for the week and I was just getting up and down all over the place. Out here, you have to because it’s so hard to hit all the greens with how windy is. So you have to get up and down out here.”

Despite a pair of bogeys coming down the homestretch, Mueller still finished the four-day event at 10 under, topping Jared Jones and Michael Block by five strokes.

Among those who also made a big move in the wind on Wednesday was Shawn Warren, a 37-year-old pro from Maine who qualified for his third PGA Championship by lighting up the windy course on Wednesday. While others were going backward, Warren fired a 66 — the best of the day — to leapfrog his way into the top 20. Warren, a former four-year captain at Marshall University, first reached the major in 2018.

But the big story was Mueller, who has previously played in one major—the 2012 US Open at the Olympic Club in San Francisco. His wife has been training for a climb this summer at Mount Rainier, and that helped as the two traversed the rolling Austin hills.

And although her anniversary dinner consisted of Domino’s Pizza — since the pair finished their round late on Sunday and couldn’t find any nearby restaurants still open — Jessie insisted it was well worth the change in plans.

“It’s been a roller-coaster, for sure,” she said. “But he’s a phenomenal player, and I know that. The key was just to keep things going and have his game working at the right times, which he did this week.

“I’m really, really proud of him.”