Magic Johnson helped turn the NCAA tournament into the event it is today, most notably because of the hype of Johnson’s Michigan State team facing off with then-undefeated Indiana State, led by Larry Bird, in the 1979 NCAA Tournament championship game. He was a unique talent given his size, athleticism and short vision at point guard.

Here’s everything you need to know about Magic Johnson’s college career at Michigan State.

The vitals for Magic Johnson

How did Magic Johnson get his nickname?

As a high school sophomore at Everett High School, Earvin Johnson was dubbed “Magic” by the Lansing State Journal‘s Fred Stabley Jr. after Johnson had a triple-double with 36 points, 18 rebounds and 10 assists against fellow South Central Conference contender Parkside. 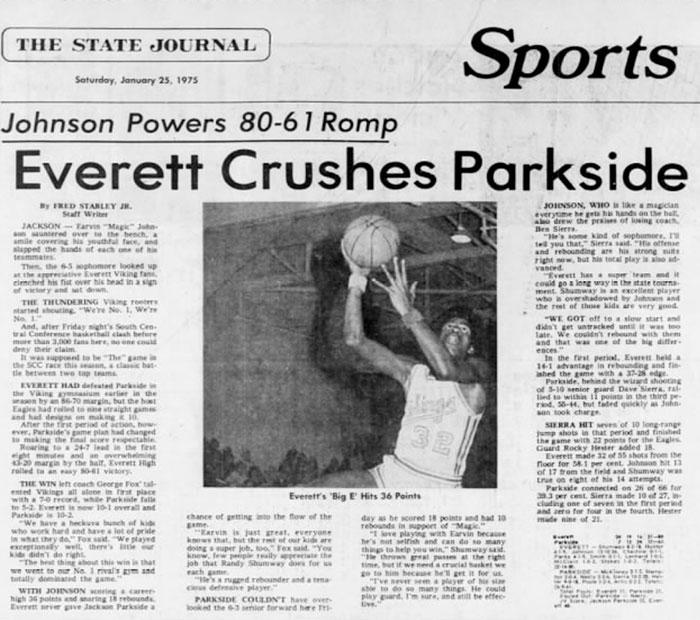 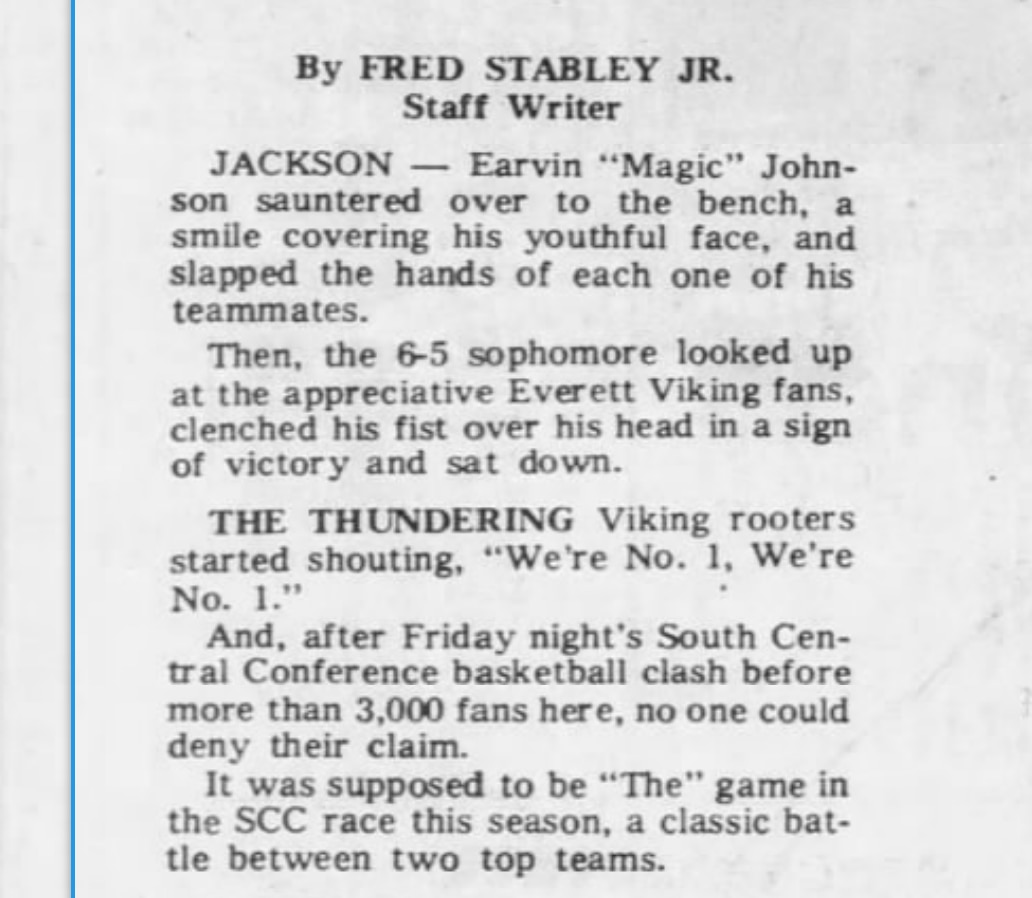 What was Magic Johnson’s record in college?

Michigan State went 51-11 in two seasons with Magic Johnson, including a 28-8 mark in Big Ten play. The Spartans started conference play in the 1978-79 season with just a 4-4 record, including an 18-point loss to last-place Northwestern, but they turned their season around to win the national championship, going 15-1 after their loss to the Wildcats.

Whatever he wanted it to be. He excelled in every role but was best with the ball in his hands. In a Michigan Class A district tournament game, for example, Johnson’s Everett High School team in Lansing, Michigan, faced a box-and-one defense. Four defenders played zone and one played man-to-man on Johnson. Johnson was held to 10 points, he had 15 assists in the 81-45 win.

That’s the kind of player Michigan State was getting in the high school All-American.

At 6-8 (or 6-8.5, depending on where his height was listed), Johnson was a big, athletic, unselfish point guard.

“Whenever Magic touches the ball the crowd is on the edge of its seat. He has given new meaning to the word ‘assist.’ Nobody knows what Johnson will do. He might see a seam in the defense, drive the lane, shoulder down, past three defenders, leaping, triple pumping and setting a layup against the glass the way a mother sets her baby in the crib.

“Or he might stand poised with ball over his head reading the movement of his teammates. No defender dares get too close to Magic out of respect for his quickness and agility. And so, he has plenty of room to operate.”

During the NBC broadcast of the 1979 national championship game, commentator Billy Packer noted Magic Johnson didn’t need an outlet pass because he was the outlet pass. After grabbing a defensive rebound, he would start the fast break, scanning the floor to decide whether he should fire a one-handed rocket pass or weave his way through opponents, changing his tempo and the length of his strike, getting defenders off balance through pump fakes and misdirection.

Johnson’s passing style was once thought to only work on the playground. “Johnson passes on the move,” wrote St.Petersburg Times sports editor Hubert Mizell, “making dish-offs that were once thought to be exclusive with the Harlem Globetrotters.”

In the first half of the 1979 national championship, Johnson hits a long bank-shot from the left corner. “He certainly can’t hit the outside shot, can he?” said NBC commentator and former Marquette coach Al McGuire in a tongue-in-cheek manner, hinting at a former hole in Johnson’s game upon which he since improved. The broadcasters went on to discuss how impressive Johnson’s jump-shooting had been in the 1979 NCAA Tournament.

First and foremost, Johnson was a showman — on the court and off. “Earvin Johnson did everything but sing Let Me Entertain You, passing overhanded and underhanded and backhanded to set up baskets,” Mizell wrote. “They stood, they roared. After the Spartans left the floor, two dozen sports reporters put a journalistic full-court press on Magic Johnson. He welcomed them. He encouraged them. Magic did everything but serve coffee.

“‘Y’all c’mon and gather round me,’ he said. ‘I love playing basketball, love it to death. And I love this attention. I eat it up. Long as you got questions, I got answers.’ “

What were some of Magic Johnson’s best games?

The whole country anticipated the 1979 national championship between Magic Johnson’s Michigan State team and Larry Bird’s Indiana State squad. “College basketball couldn’t have a better attraction than it will have tonight when those two teams, led by the two most appealing players in the game, meet in Salt Lake City for the NCAA championship,” wrote The Evening Sun’s Bill Tanton. “Not since 1974, when Bill Walton of UCLA went against David Thompson of North Carolina State, has there been a final with this sort of appeal.”

Prior to the championship, Michigan State coach Jud Heathcote put Johnson on the Spartans’ second team in practice to imitate Larry Bird. In the title game, Magic scored a game-high 24 points on 8-of-15 shooting, plus 8-of-10 free throw shooting, seven rebounds and five assists in a 75-64 victory. He started the game by spending a lot of time going head-to-head defensively against Larry Bird, who scored 19 points on just 7-of-21 shooting, in Michigan State’s 2-3 matchup zone.

But that was nothing compared to the triple-double he had against Penn in the Final Four: 29 points on 9-of-10 shooting and 11-of-12 free-throw shooting, 10 rebounds and 10 assists. In fact, he had two triple-doubles in five games in the 1979 NCAA tournament with a 13-point, 17-rebound, 10-assist game against Lamar in the opening round.

The 1979 title game was Johnson’s only game in that year’s NCAA tournament that he didn’t record a double-double.

Watch the full replay of the legendary 1979 national championship game below.

What awards did Magic Johnson win in college?

Here are some of the awards and honors that Johnson earned at Michigan State:

What records did Magic Johnson set in college and where does he rank among historical greats?

What did people say about Magic Johnson?

Michigan State coach Jud Heathcote: “Earvin (Magic) Johnson is the best player in the open court in all of basketball — professional, international, intercollegiate. Nobody else can do the things he can do with the basketball in the open better or as consistently.”

Wisconsin coach Bill Cofield: “Magic Johnson is unquestionably the finest freshman in the Big Ten. He has the greatest effect on his basketball team. He’s the real reason for the turnaround at Michigan State.”

Michigan State teammate Greg Kelser: “On offense, you always have to keep your eye on him or else he may hit you with the ball.”

Kansas City Kings General Manager Joe Axelson: “Most exciting college player I’ve ever seen. I can’t believe God created a 6-8 man who can handle the ball like that.”

The Capital Times’ Robb Johnson: “He’s the only 6-8, 205-pound point guard this side of the NBA … He keeps the rest of the Spartans cutting and moving because they know if they are open Johnson will get the ball to them.”

Magic on finding his teammates on the court: “[Greg Kesler’s] my main man. Greg jumps so high that I can throw the ball anywhere short of the ceiling and he’ll get it. My teammates know me, they know the ball can come at them anytime and from any direction.”

Magic on his teammates getting used to his passing ability: “We did have some problems when I first came to Michigan State. In practice, I surprised a couple of guys with my passes and they came up with nosebleeds. Now, they watch.”

Magic on college basketball compared to professional basketball: “I do know that pro ball won’t be as exciting and as much fun as college basketball. It’s a thrill now every time I walk on the floor. I would like it to always be that way.”

Magic after arriving at the Final Four: “You gotta love all this. There’s pressure, but I thrive on pressure. You gotta enjoy it.”