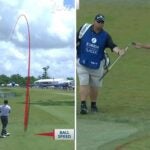 Kevin Kisner and Scott Brown had a 9th hole to forget on Sunday at the Zurich Classic.

It’s difficult enough for professional golfers to record a quintuple bogey on their own. These guys are really good, and “really good” means that most weeks, a double or (gasp!) triple-bogey is the worst they’re capable of mustering. Sure, there are occasional quads and snowmen, but those incidents are usually chalked to momentarily lapses in focus.

A fivefold bogey in team golf, however, means a lapse in focus for two pro golfers simultaneously. That’s not just a lightning strike, it’s two lightning strikes, at the same time … in the same place. And on Sunday at the Zurich Classic, that’s precisely what happened to the team of Kevin Kisner and Scott Brown.

The breakdown started on the 9th hole, at par-3 guarded on one side by a large pond. For Sunday’s final round, TPC Louisiana’s green staff played a game of risk/reward; tucking in the pin on the 9th hole directly behind the jutting pond. The player who judged the distance correctly off the tee would be rewarded with a makeable look at birdie. The one who didn’t use enough club would find himself flirting with disaster.

Brown stepped to the tee box feeling aggressive. Team Kisner/Brown stood a country mile behind the leading pair of Xander Schauffele and Patrick Cantlay, but had plenty of ground to make up down the back nine on the rest of the field. A strong finish could vault them 10 or more places up the leaderboard, which could, in turn, double their paycheck for the week.

Brown hit a high, arcing tee shot aiming for the small slab of green space right next to the flag. But when his ball returned to the earth, he landed a clean 10 yards short of where he’d hoped and dropped directly into the pond.

No worries, Brown surely thought. So long as Kisner took care of business on the chip shot, the pair would face a putt for bogey. Nothing to worry about, right? Wrong.

On the next shot, a 30-yard chip, Kisner dumped his chip into the water. Now it was Brown’s turn to hit the pair’s fifth shot on the par-3 … and they still hadn’t reached the green.

But the carnage wasn’t over there. Brown chunked the duo’s next chip into the water — their third water ball in just three swings.

“No, no, no!” Steve Burkowski added from the broadcast tower.

Finally, on his second try from 30 yards (the pair’s 7th shot), Kisner landed his approach safely on the putting surface.

On the ensuing putt, Brown found the bottom of the cup, and the two golfers departed from the par-3 ninth with a career first (and with any luck, also a last): an alternate shot, quintuple bogey 8.

James Colgan is an assistant editor at GOLF, contributing stories for the website and magazine on a broad range of topics. He writes the Hot Mic, GOLF’s weekly media column, and utilizes his broadcast experience across the brand’s social media and video platforms. A 2019 graduate of Syracuse University, James — and evidently, his golf game — is still defrosting from four years in the snow, during which time he cut his teeth at NFL Films, CBS News and Fox Sports. Prior to joining GOLF, James was a caddy scholarship recipient (and astute looper) on Long Island, where he is from.