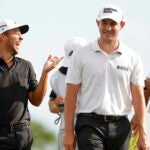 Xander Schauele rears back in laughter during Saturday’s third round of the Zurich Classic.

It all started with a 59, and it all ended with a record-setting victory. Patrick Cantlay and Xander Schauffele each nabbed their first wins of 2022 Sunday, teaming up at the Zurich Classic to shoot 29 under, better than any pair in the young history of the team event.

The American Ryder Cup duo used a Sunday 72 in alternate shot to polish off a wire-to-wire finish at TPC Louisiana, but it was hardly the most impressive round of their week. The real fire from Team Cant-elle (or is it Schauff-lay?) came on Thursday and Saturday, during the best ball portions of the competition.

On Thursday, they grabbed hold of the tournament with the aforementioned 59, a tournament record that even they couldn’t get excited about. “We played really well, made a lot of putts today on a day that was a little tricky with the wind and didn’t birdie a lot of the same holes. When you do that in this format, that’s really the key.”

It was the first 59 of either of their careers, which they were happy to joke about, in the lead after Day 1. They extended their lead with a 68 in the second round’s alternate shot format, but start out slowly on Day 3.

The Best Ball Blazers turned in 32 Saturday morning. By no means bad, but by no means amazing. That was still to come. Team Cant-elle then birdied eight of the final nine holes Saturday afternoon to take a 5-shot lead into the final day. For the second time this week, they described it plainly — “we made more birdies than the rest of the field,” Schauffele said — and for the second time this week, they compared it to the layout of a basketball game.

“It’s the third quarter,” Schauffele said. “We finished a really good three quarters here and we have one more to go.”

A record-setting three-quarter performance, to be clear. It was the best 54-hole performance since the event adopted a team format in 2017. Finishing off the fourth quarter was no simple task. Not in alternate shot, were bogeys can pile up with slight misses here and there.

They were pushed for a minute by Billy Horschel and Sam Burns, who started the final round five under through 11. Schauffele and Cantlay helped out by making bogey on the 9th and 10th, too. But when Burns’ tee shot on the drivable par-4 16th went swimming in the hazard, they lost their last chance at an easier birdie for added pressure.

The rest of the round played out rather anticlimactically. Cantlay and Schauffele made by on holes 12-16, and when they got up and down for from a tricky lie on 17, Colt Knost captured the status perfectly on the CBS broadcast: “Start icing down that champagne.”

Team Cant-elle did their best to keep the hype down by laying up off the tee, laying up into the green and scraping out a 6 on the par-5 finisher. It didn’t matter, of course. They had won by two.

“It’s awesome, Schauffele said when it’s all over. “I said it earlier this week, you know, if there’s any success I could share with someone, it’d be Pat. So I’m happy we could get it done.”