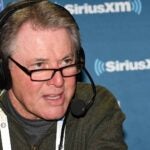 Mark Lye, a former PGA Tour winner turned golf commentator, said Sunday he was fired from his role as a SiriusXM PGA Tour Radio host over comments he made a day earlier about the WNBA.

In an email to GOLF.com, a SiriusXM spokesperson confirmed that Lye, 69, “will no longer be hosting.”

Lye’s comments came on Saturday’s episode of The Scorecard, during a discussion of the LPGA. A Twitter user captured and shared 59 seconds of the conversation:

“You know, the LPGA Tour to me is a completely different tour than it was 10 years ago,” Lye said. “…You couldn’t pay me to watch. You really couldn’t. Because I just, I couldn’t relate at all. It’s kind of like, you know, if you’re a basketball player — and I’m not trashing anybody; please, don’t take it the wrong way — but I saw some highlights of ladies’ basketball. Man, is there a gun in the house? I’ll shoot myself than watch that.

At this point, a co-host interjected: “Good luck getting some WNBA stars to come play for you.”

Reached on Sunday by GOLF.com, Lye said, “I was terminated about comments made about the WNBA, which I apologized for starting the next segment.”

Lye also posted this explanation to Twitter: “The fact that I can’t relate to WNBA does not make me sexist in any way. All you haters should listen to the whole segment, where I completely glorified womens golf, which I love to cover. Thanks for listening.”

On Sunday afternoon, the Saturday episode of The Scorecard was no longer available on the SiriusXM website.

Lye also worked as an analyst for Golf Channel from 1994 to 2012, according to his LinkedIn page.

Nick Piastowski is a Senior Editor at Golf.com and Golf Magazine. In his role, he is responsible for editing, writing and developing stories across the golf space. And when he’s not writing about ways to hit the golf ball farther and straighter, the Milwaukee native is probably playing the game, hitting the ball left, right and short, and drinking a cold beer to wash away his score. You can reach out to him about any of these topics — his stories, his game or his beers — at nick.piastowski@golf.com.