The SEC tournament has tipped off at Bridgestone Arena in Nashville, Tenn., and Vickie Johnson is there, front and center, ready for the show.

“For the last eight years, that’s one tournament I go to every year,” the Dallas Wings coach said. “I stay there from the beginning to the end because you’re never bored. There’s always great basketball and great talent. I love watching. I sit there and watch the whole time. I go at halftime to get some popcorn, then I come back and watch the show.”

The SEC is considered by many the best show in women’s basketball this season. It has long been home to powerhouses. The late Pat Summitt led Tennessee to eight national championships from 1987 to 2008, making the Lady Vols the pinnacle of the sport. Now, South Carolina coach Dawn Staley is currently redefining what it means to be a championship coach and creating a legacy of her own. Though the Gamecocks are ranked No. 1 nationally, the SEC is also deep.

Half of its 14 teams have been ranked in the AP Top 25 this season; with No. 1 South Carolina, No. 8 LSU, No. 16 Tennessee and No. 25 Georgia currently ranked. The Gamecocks are expected to be the top overall seed for the NCAA Tournament, and Kentucky boasts potentially the top WNBA Draft pick in Rhyne Howard. ESPN.com projects nine SEC teams will make the tournament field — more than any other conference this season.

“I think it’s a strong conference because the commissioners and the presidents in our conference pushed it along,” said Ann Marie Rogers, the retired former Florida associate athletic director, who is being honored at the conference tournament as one of the SEC’s trailblazers.

Its historic strength, many say, lies in several areas including its coaching ranks, player talent and commitment to diversity.

Staley, a Hall-of-Famer, is the SEC’s headliner after transforming South Carolina over the past 14 seasons into a powerhouse, with nine straight NCAA Tournament appearances and taking the Gamecocks at least as far as the Sweet 16 the last seven tournaments.

Staley, whose Gamecocks are 27-1, recently won SEC coach of the year. Many had suspected the award could go to LSU’s Kim Mulkey, who left Baylor where she had won three national championships and turned around the Tigers from a 9-13 record last season to a 25-4 record this season. The rest of the upper-echelon of the conference is infused with young coaching talent, six of them younger than 45.

Despite hitting a rough patch with injuries, Kellie Harper, 44, has Tennessee looking like it’s getting closer to its former glory days.

Kelly Rae Finley, 36, who led No. 23 Florida to its best season since 2016, was one of 15 candidates on the Naismith Women’s Coach of the Year watch list released earlier in February. On Monday, Florida removed the interim tag from her title, officially naming her head coach and giving her a five-year contract, and on Friday, she’ll lead the Gators in an SEC quarterfinals game.

At Vanderbilt, first-year coach Shea Ralph, 43, had her season end with an SEC tournament second-round loss in Florida, but the Commodores’ future looks promising. Though sixth-seeded Georgia bowed out unexpectedly in the second round to No. 11 seed Alabama, Joni Taylor, 42, has the Bulldogs safely in the NCAA Tournament for the fourth time in her seven seasons.

Kentucky coach Kyra Elzy, 43 and in her second season, led the Wildcats to a disappointing seventh-place conference finish with a 15-11 overall regular-season record. But the Wildcats are on a seven-game winning streak and advanced as a No. 7 seed to Friday’s SEC quarterfinals to face No. 2 seed LSU.

Ole Miss coach Yolett McPhee-McCuin, 38, has the Lady Rebels in the SEC quarterfinals. After starting the season 17-2 and 5-1 in SEC play, they were ranked in the AP Top 25 in January for the first time since 2007.

“The SEC is the best conference in the country — I know that’s debatable — night in and night out,” she said. “When I first got the job, I remember I was at the table with Vic Schaefer (former head coach of Mississippi State), Dawn Staley, Gary Blair (Texas A&M head coach) and I was thinking, ‘These cats have been in the Final Four! These are legitimate head coaches.’ I think that’s part of what makes the league so strong. And then you’ve got Mulkey in there now? And the young stars like myself, Kelly Rae Finley from Florida … it’s just great.” 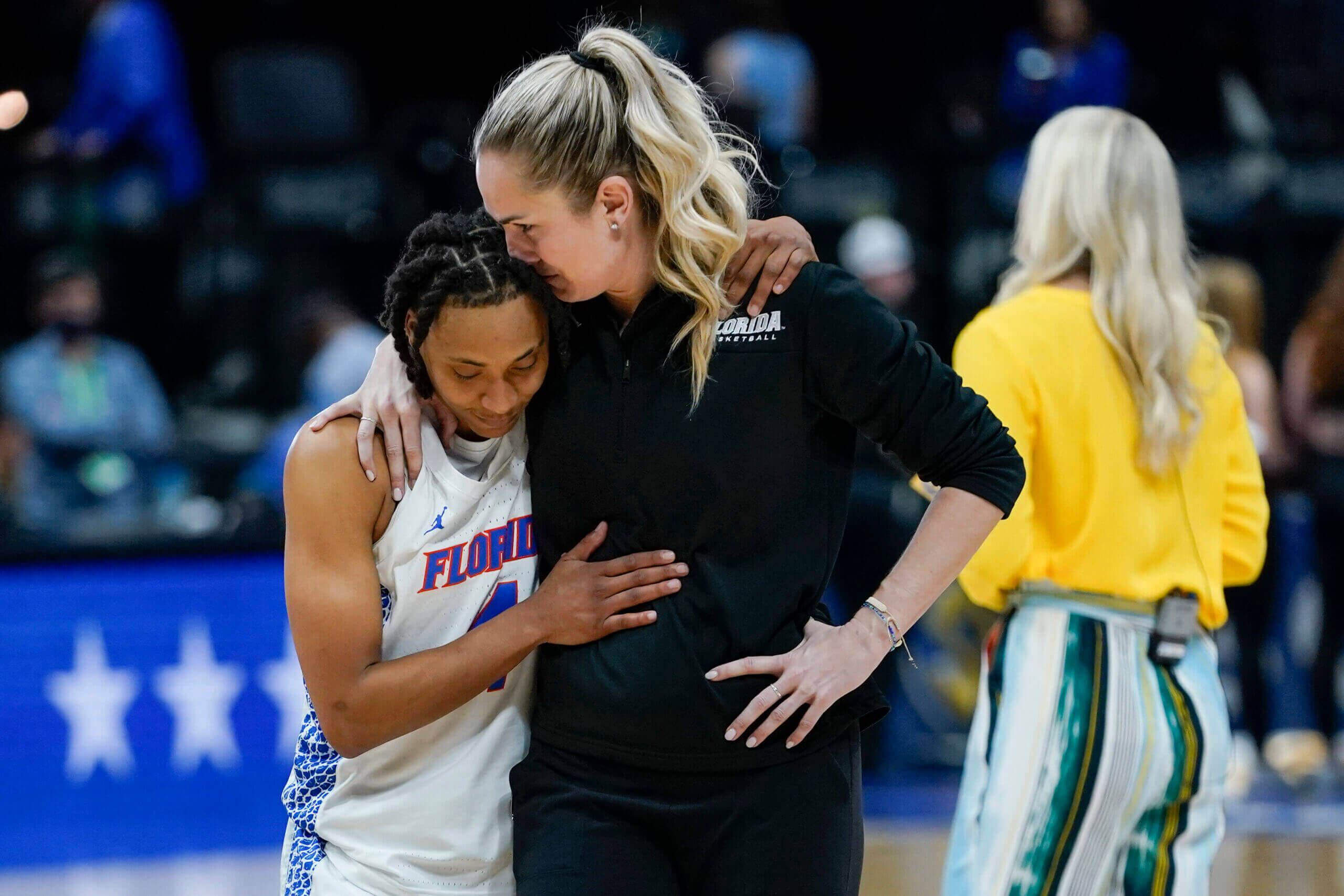 Florida coach Kelly Rae Finley (right) and Zippy Broughton walk off the court after defeating Vanderbilt in the second round of the SEC tournament. (Mark Humphrey/Associated Press)

The strength of the SEC most definitely lies in its coaching, one WNBA general manager said anonymously. “Many of the SEC coaches are just as good — in terms of basketball IQ and coaching skills — as many coaches in the professional ranks,” the GM said.

The numbers back up the SEC’s ability to produce wins and talent:

• Five SEC coaches have guided teams to a Final Four appearance, with three (Staley, Mulkey at Baylor and Blair, who retired after the Aggies’ season ended earlier this week) winning national championships. Since 2015, SEC teams — South Carolina, Mississippi State or both – have been represented five times in Final Fours, which is second only to the ACC Final Four representation.

• Nine SEC players were picked in the 2021 WNBA Draft, including four in the first round — the most of any conference.

• In 2020, 21 players on WNBA rosters played for SEC schools — second only to the 29 from the ACC. Over the last 12 drafts, 68 SEC players have heard their names called, with 26 of those being selected in the first round.

“They may not all be WNBA-ready, but you can tell they are well-coached and respect the game,” Johnson said. “Kim Mulkey leaving Baylor coming to LSU is a huge thing because now you bring that talent to the SEC. And let’s talk about the (WNBA) draft. If it goes like the rumors, we will have two of the top three or four from the SEC. If it goes according to the draft boards then that’s a big statement as well.”

Howard, Kentucky’s 6-foot-2 senior, is in contention to be one of the top two WNBA Draft picks in April, and many mock drafts project Ole Miss’ Shakira Austin to go at No. 3. South Carolina guard Destanni Henderson could be first-round selection as well. And that’s just the talent that will be leaving. South Carolina junior Aliyah Boston, who is a front-runner for several national player of the year awards, will be next season’s marquee player again.

Johnson said she intentionally scouts the SEC, as did other WNBA coaches and GMs who asked for anonymity. “I know they have been well-coached in a way that I like,” she said. “I like defense. The SEC conference is about defense, and I love that. I am not saying the other conferences aren’t homing in on defence, but for me I like the confidence, the aggressiveness (from SEC players).”

The Dallas Wings have several SEC players on its 12-woman roster, including former WNBA Rookie of the Year Allisha Gray and Tyasha Harris, both of whom won championships at South Carolina; Charlie Dungee from Arkansas, and Isabelle Harrison from Tennessee. Johnson also coached Wilson when Johnson was an assistant with the Las Vegas Aces.

Tennessee has had more than 40 of its players drafted into the WNBA over the past 25 years. The reason, says Harper, is the strong tradition of championships and dominating players.

“The Lady Vol program attracts good players,” Harper said. “The stage that these players get to prepare and perform on helps prepare them for the next level of competition.”

McPhee-McCuin adds that SEC retains players well, boosting the conference’s overall talent level. “A lot of the players come back, so the experience is something that is valuable; they know each other, battled against each other,” she said. “What’s cool about the SEC is every night you play, you are going up against a pro, at least in the top half.”

Part of the SEC’s attraction is its diversity, says McPhee-McCuin, one of the 14-team conference’s four Black female coaches. The others are Staley, Taylor and Elzy. Nikki McCray stepped down from Mississippi State in October, citing health concerns. Last season, there were seven Black female head coaches in the SEC, according to The Institute for Diversity and Ethics in Sport, with only three Black female head coaches in the ACC, one in the Big Ten, two in the Pac-12 and none in the Big 12.

“One thing I like about the SEC is it evolves,” McPhee-McCuin said. “It was the first conference to have more than just one Black coach. It doesn’t mind being in the forefront.”

The spotlight is on the SEC women’s basketball teams this week in Nashville — and if the conference fulfills expectations, it will be at the forefront throughout March.