The NFL draft is nearly upon us.

After finishing their season falling to the San Francisco 49ers in the wild-card round, the Dallas Cowboys own the No. 24 overall pick in the first round.

Dallas has held the No. 24 pick three times in franchise history and has had some success picking in that slot.

The Cowboys selected running back Calvin Hill in 1969, linebacker Robert Jones in 1992 and wide receiver Dez Bryant out of Oklahoma State in 2010 — all of whom were Pro Bowlers.

Who will the Cowboys select this time around? Here’s what notable mock drafts have to say:

SportsDay’s Michael Gehlken (April 25): “In 2015, Johnson was an uninitiated and undersized 225-pound tackle. Last month, at 312 pounds, he dominated the 225-pound bench press at the NFL combine, completing 32 reps despite long 34-inch arms. The guard/center prospect from Boston College is expected to draw consideration from the Cowboys if available Thursday with the No. 24 overall draft pick.”

NFL.com’s Daniel Jeremiah (March 22): “Johnson has position flexibility and would help protect Dak Prescott for the next decade.”

The Athletic’s Dane Brugler (April 14): “I’ll be surprised if this pick is anything other than an offensive lineman or wide receiver. Treylon Burks will be an enticing option for Dallas, but I’m giving the edge to the plug-and-play left guard who will help bring stability to an inconsistent unit.”

ESPN’s Mel Kiper (April 13): “I love this team-prospect pairing, especially if this many receivers have already been taken. Ebiketie can join Micah Parsons — another former Nittany Lion — in Dallas, and he’ll allow Parsons to stay at off-ball linebacker.”

Associated Press (April 25): “Remember how staunch the Dallas offensive lines were for years? No longer, so the Cowboys address that area.”

NFL.com’s Charles Davis (April 18): “The Cowboys’ offensive identity has been dependent on their offensive line, and it’s time for some reinforcements. Is Green the best pure guard prospect in this year’s class? A case can definitely be made.”

NFL.com’s Lance Zierlein (April 12): “The choice here could come down to Zion Johnson or Raimann. The latter is the better athlete and can play left guard or tackle, which gets him the nod.”

Peter King, FMIA (April 25): “Tea leaves pick, because of Dallas’ love of building the offensive line (Travis Frederick, Zack Martin, Tyron Smith); because of high regard for Iowa coach Kirk Ferentz; and because Linderbaum is rated consistently the best center and a top-20 overall prospect on many boards. Which, for a guy who plays only one position, is saying something. Linderbaum is a rock-solid center, with 35 starts at the position over the past three years. He’s a little undersized for NFL center (6-2, 298) and doesn’t have position versatility—at least not yet. But he’s a physical, competitive player with the Ferentz pedigree. Iowa turns out terrific offensive linemen.”

ESPN’s Matt Miller (April 26): “The Cowboys are a true wild card in this draft and could realistically select a wide receiver or offensive lineman here. In this mock draft, we have Jerry Jones & Co. addressing the biggest need on defense — linebacker. Lloyd has been a proven playmaker at Utah and has the three-down ability the Cowboys desperately need in the middle of the field. And like last year’s top pick, Micah Parsons, he is also pretty good at rushing the quarterback.” 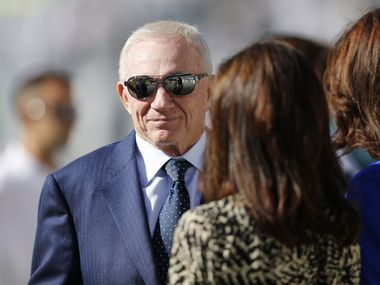