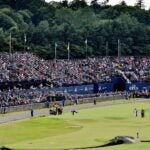 St. Andrews will welcome record crowds at the 150th Open in July.

For at least one year, the Masters might not be the hottest ticket in golf.

On Tuesday, the R&A announced record-shattering attendance numbers for the 150th Open Championship at the Old Course at St. Andrews, promising to bring the largest event in tournament history to the “home of golf” this summer.

The governing body and tournament organizer said it is dealing with an unprecedented surge in fan interest in 2022, prompting an expansion from the tournament’s previous record capacities. Ticket requests have exceeded 1.3 million, the most in Open history. To meet that level of demand, the R&A is issuing some 290,000 general admission tickets, the most ever. When it’s all said and done, the final tally of those on-site at the Old Course in July could stretch well above 300,000, making it easily one of the largest golf tournaments ever contested.

For the Open, the explosion of ticket interest comes threefold in 2022 after a pair of pandemic-altered years. European golf fans are eager to return to live events in full after the pandemic forced the cancellation of the 2020 Open and reduced crowd capacity in 2021. For those in and around the Emerald Isle, St. Andrews marks the culmination of three years of pent- up demand.

But the fans could — and likely will — be coming from far beyond Europe, thanks largely to this year’s Open venue. The Old Course is perhaps the most recognizable golf course in the world, and its slot in the R&A’s rota system draws international interest from fans looking to cross golf’s holy pilgrimage off their bucket lists.

And the cherry on top? July will mark the 150th playing of the Open, an anniversary the R&A plans to celebrate in style at the Old Course. Movers and shakers from every corner of the golf universe will be in attendance, from history-makers to the sport’s up-and-comers. It also helps that the tournament promises one of the best fields in golf in 2022, and as things currently stand, is likely to include one Tiger Woods.

The fan total will smash the record set by St. Andrews in 2000, when 239,000 spectators crammed into the Old Course to see Tiger’s first-ever Claret Jug. According to the R&A, more than 80,000 fans will be on-site for the practice rounds alone. In an effort to broaden the sport’s appeal, the governing body says it has set aside 20 percent of its 290,000 tickets, or some 58,000 tickets, exclusively for fans under the age of 25.

In all, the Open will generate more than $200 million for the local economy, the R&A said, with more than $100 million coming during tournament week.

The 150th Open Championship will be contested from July 10-17 in St. Andrews, Scotland.

James Colgan is an assistant editor at GOLF, contributing stories for the website and magazine on a broad range of topics. He writes the Hot Mic, GOLF’s weekly media column, and utilizes his broadcast experience across the brand’s social media and video platforms. A 2019 graduate of Syracuse University, James — and evidently, his golf game — is still defrosting from four years in the snow, during which time he cut his teeth at NFL Films, CBS News and Fox Sports. Prior to joining GOLF, James was a caddy scholarship recipient (and astute looper) on Long Island, where he is from.