“When they came around and said we’re ready for AU basketball, I said, ‘Ya’ll already know I’m in! Where do I sign? Let’s get this thing going,’” she says.

Cloud began texting and calling other basketball players who hadn’t gone overseas or weren’t on a current team. Retired WNBA player Ty Young was one of the first she recruited.

“You know, we’re always talking about women getting more,” Young says. “And the direction that (AU) was going for this league, with telling people’s stories and it being player-driven, led by players, I think that’s something that’s super dope because it’s never been heard of or it’s never been done. And so I was excited to join something new, like a fresh start.”

When the WNBA season ends in October, women’s professional basketball in the US goes into hibernation. The lull has become so routine, it’s expected. Many players head overseas to continue playing and earn comparatively more massive contracts, while some players get involved in coaching, serve as college basketball analysts and commentators, or embark on business ventures. There have been no other viable options to keep playing professionally in the US

Athletes Unlimited wants to change that. On Wednesday night, it launches its inaugural basketball season in Las Vegas.

Cloud believes the league can serve as an audition platform for many WNBA hopefuls. With about 144 spots on only 12 WNBA rosters and no WNBA developmental league, many players find themselves on the outside looking in after college.

“With it being at the beginning of the year, people are able to see the players before the WNBA tryouts come about,” Young adds. “They get exposure.”

Looking around the sports landscape, Athletes Unlimited founder and CEO Jon Patricof saw the growth of women’s sports and the opportunity for investment. Together with friend and business partner Jonathan Soros, they decided that getting involved in already-established leagues like the WNBA and NWSL wasn’t the way to go. Instead, they wanted to try something fresh with a unique player-focused approach.

Patricof and Soros examined the history of women’s sports leagues and examined what worked and what didn’t. They learned that most women’s sports investors made the mistake of starting big instead of small, miscalculating expenses, not getting the players directly involved in some of the decision making, and underestimating the importance of sponsors for financial and marketing support. Athletes Unlimited has tried to do the opposite.

“You have to learn from history as far as what happens inside and outside of women’s sports,” Patricof says. “I think some of the elements of Athletes Unlimited that were fundamental in that regard were playing shorter seasons, playing in one location, trying to minimize some of the operating costs. … I think I approached it with an appreciation of history.”

Athletes Unlimited initially launched AU Softball in 2020. A year later, it did the same with AU Volleyball. And last summer, AU Lacrosse launched.

“We started the conversations around basketball about a year ago,” says Patricof. “And at that time, we actually hadn’t decided that basketball would be the fourth sport. We were very open-minded about what we thought would be the best sport, and we kind of took an analytical approach while looking at certain market conditions and fan behavior.” 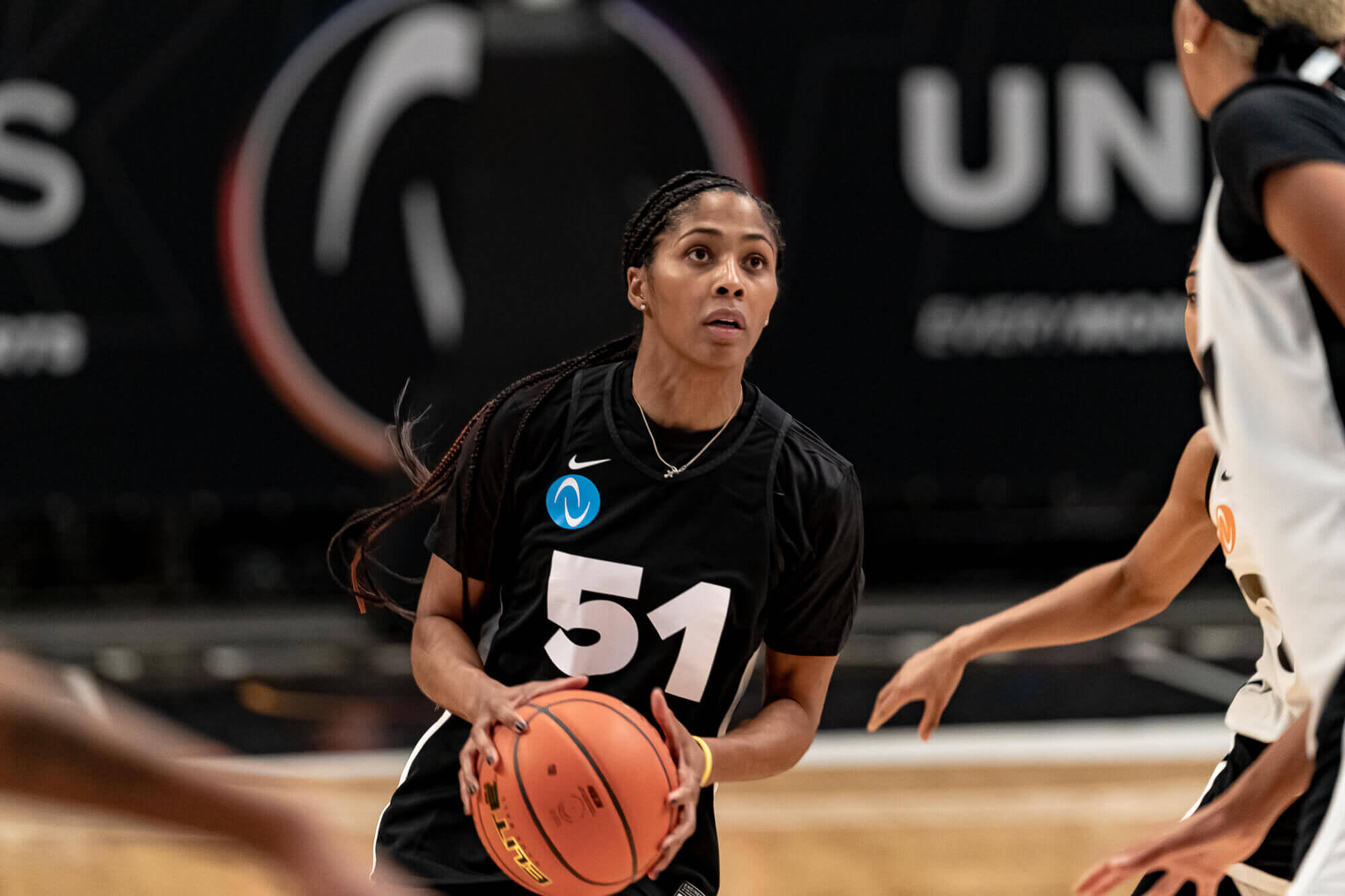 Sydney Colson, who played in the WNBA, is part of a decision-making player committee for AU Basketball. (Jade Hewitt/Courtesy of Athlete Unlimited)

Patricof and his team also met with Cloud, Young, Sydney Colson and other basketball players to gauge their interests. After extended conversations and positive feedback, launching AU Basketball seemed like the most logical next step. All three players are integral parts of its players executive committee, which also includes the Fever’s Jantel Lavender and free agent Tianna Hawkins. They meet weekly with Athletes Unlimited staff to evaluate all aspects of the league, including roster additions and rules.

“I think that, again, that all factors into how the players responded when we came forward with the idea of ​​launching (the league),” Patricof explains. “What we would hear from them most often was receptivity to the idea of ​​having the opportunity to stay in the United States, closer to home. (To) be able to not necessarily play five or six months in the offseason, but play in a more concentrated time period to give your body some rest and do some other things you maybe want to do. And play in this incredibly competitive league.”

Compensation, of course, is also key. Women’s professional basketball players make 10s of thousands – if not millions – more by playing overseas. That’s one of the main reasons why many choose to play abroad, essentially becoming year-round players. The average compensation for an AU Basketball player is $20,000. Top players make $40,000. And unlike long-term deals in the WNBA, contracts are on a season-to-season basis. There’s a bonus structure in place based on how well players and teams perform. In addition to compensation, Athletes Unlimited also will match 50 percent of the end-of-season bonuses to players’ causes of choice.

AU Basketball is structured similarly to the other AU sports leagues.: There are four teams in the league and 11 players on each team. All games are played in one location—in this case, Las Vegas. Players earn and lose points based on how well their team performs (70 percent of overall player points) and how well they perform as individuals based on certain stats (30 percent of overall player points). For example, an assist is worth 10 points, while a turnover is a 10-point deduction. A team win is worth 100 points. MVP points are also given out based on fan voting (by fans who joined the Unlimited Club at a cost).

Throughout the season, all 44 players in the league constantly move up and down the leaderboard. Every Sunday, the top four point-leaders become captains and draft new teams from the player pool. At the end of the five-week season, the final leaderboard determines the champion.

If Athletes Unlimited sounds unlike any sports league you’ve heard of before, that’s because it is. The players are essentially in charge of each league, involved in every decision, play the games, and serve as the foundational block for each sport.

While the Athletes Unlimited model has worked so far for softball, volleyball and lacrosse, basketball is a different story. For AU Basketball to become the optimum league for professional women’s basketball players in the winter, it will need a steady mix of talent, recognizable names and stout competition. It also has to be entertaining and draw an audience. And it has to be worth the player’s time and investment. That’s not a guarantee.

The appeal of playing overseas is largely financial. Playing conditions are sometimes terrible, amenities lacking and being away from family and friends can be hard. When they arrived in Las Vegas, Cloud and other AU Basketball players shared “horror stories” of competing overseas and why it factored into their decisions. But other players might not want to turn down lucrative deals for lesser pay just to stay stateside.

Name recognition is also a major factor in women’s basketball. If the majority of the league is made up of lesser-known players, will fans be motivated to tune in and follow along? And though AU Basketball won’t have to compete with the WNBA in the middle of January, women’s college basketball is still in full swing and has its share of invested fans.

Still, Patrick is cautiously optimistic. He knows that ultimately AU Basketball will only be as good as the players involved. And that’s exactly why Cloud is so confident.

“I believe in this system, I believe in AU. I’ve seen it be successful in softball, in volleyball and lacrosse,” she says. “There’s no pressure because I know it’s gonna work. I know it’s gonna succeed because it’s such an amazing thing. So, for me, there’s no nervousness. There’s no pressure. I’m just excited because I know this is the next big thing for us.”