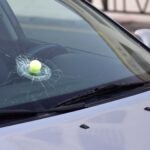 Smack a tee shot out of bounds and it will cost you strokes. But the penalties might not end there.

A reminder came this week from Massachusetts, where a couple won a nearly $5 million verdict for their suffering after hundreds of golf balls hit their course-side home.

In this case, the jury found the neighboring country club at fault for failing to protect the couple’s property.

But take note, dear golfer: Statutes vary around the country, and depending on where you are, you, the individual player, could be held liable for damage done to off-course property by your slice.

Not being an attorney, the Etiquetteist is not equipped to offer any further legal counsel.

But he can weigh in on another question: What are your ethical obligations if you smash up someone’s property with a loose shot?

Your knee-jerk reaction might be to shrug off responsibility with a buyer-beware rationalization: “Hey, they were the ones who decided to live next to a golf course. They should have known what they were getting into?”

But do you know that for sure?

Maybe they moved in before the course was built? Or maybe the layout was reworked after they purchased their property, putting their home more directly into the line of fire?

Anyway, that’s all beside the point.

Driving a golf ball is like driving a car. If you dent somebody’s fender in the parking lot, it’s on you to leave a note with your contact information. The same applies if you send your Titleist screaming through some poor sap’s living room window. It’s your ethical duty to let the homeowner know what happened and how you can be reached.

Does this mean you’re sticking yourself with the full cost of repairs? Unlikely. The homeowner surely has insurance. The course probably has coverage, which would leave only a deductible As with a note left after a fender-bender, you’re showing that you are an upstanding person who is willing to have a conversation and come to a reasonable agreement.

Could you get away with your offense unnoticed?

No doubt. Based on anecdotal evidence (and human nature), that’s what most golfers would do. But that doesn’t make it right!

And you don’t want that on your conscience.

Nor do you want to attract bad karma.

As a cautionary tale, consider the case of the New Jersey golfer who broke a window with his banana ball and sped off in his cart without alerting the homeowner (a hit and run, if you will), only to be convicted by the evidence he ‘d left behind: his ball had his name stamped on it.

What comes around, goes around.

The Etiquetteist learned this rule firsthand many years ago, when, on the closing hole of a Boston-area muni, he sent a high-altitude tee shot arcing toward a parking lot filled with scores of cars.

“Well, there goes somebody’s windshield,” the Etiquetteist said to his playing partner, in a tone that was surely too cavalier for the golf gods’ liking.

Some 30 minutes later, when he went to load his sticks into the trunk of his Chevy, the Etiquettiest discovered that his front windshield was shattered. Resting in the passenger seat was his own ball.