The Greyhound bus rides weren’t particularly luxurious. Those nights spent sleeping in the car weren’t ideal, either. But what price can be considered too high when you are in pursuit of a dream?

There are many well-traveled prospects in the NFL Draft because the road to football’s highest level can be long and unpredictable. But try finding a prospect whose route has covered two continents and hopscotched from Rhode Island to Tennessee to New York to North Dakota to New Mexico to Colorado.

That’s the journey Komotay Koffie has taken to the NFL’s doorstep, and he has no plans to waste the opportunity now that he’s here. This isn’t new. Koffie, the older brother of Colts 2021 first-round pick Kwity Paye and a Liberian immigrant born amid a bloody civil war, is used to going the extra mile — often quite literally.

“I get emotional when I think about everything I’ve been through,” the cornerback prospect from Northern Colorado said. “There were some steps along the way where I didn’t think I was going to see the finish line.”

Had he cut any corners, perhaps he wouldn’t even have this chance. Had he not left home at 16 in pursuit of a football career that was yet to blossom, had he given up when major-college offers did not materialize after high school, had he not acquired the same work ethic of a mother who worked 18- hour days to make a way for him and his siblings, the mere idea of ​​a potential NFL career would likely be unfathomable.

Way too much had to happen for Koffie to wind up in this position for him to not do his part.

It hasn’t been easy. There were times when Koffie struggled to cope with his realities and the contrast between his difficult circumstances and those of his brother, who enjoyed success as a blue-chip high school recruit and starred at Michigan.

“I remember one time crying to my mom and saying, ‘Why does God always have to make my journey so hard?’” Koffie said. “I couldn’t understand it. I used to wonder. I was questioning why the door was always shutting in my face but my brother’s door was always wide open. He walked through every single door whenever he wanted. I questioned God. Why did it have to be that way?”

Little did Koffie know that Paye might not be where he is if not for the inspiration gained from his brother.

“People see how hard I work, but it really comes from him,” Paye said. “I remember when he was in high school and I was still in middle school. He used to work out before he went to bed. I would be chillin’ on the couch or playing video games, and he would turn it off and tell me to come lift weights with him. …I would be like, ‘Bro, I just wanna chill, man.’ But that’s just kind of who he was. He loved working out, and it inspired me to do the same thing. He would never rest until he got where he wanted to be. He was never satisfied.”

Really, Koffie never had the option. 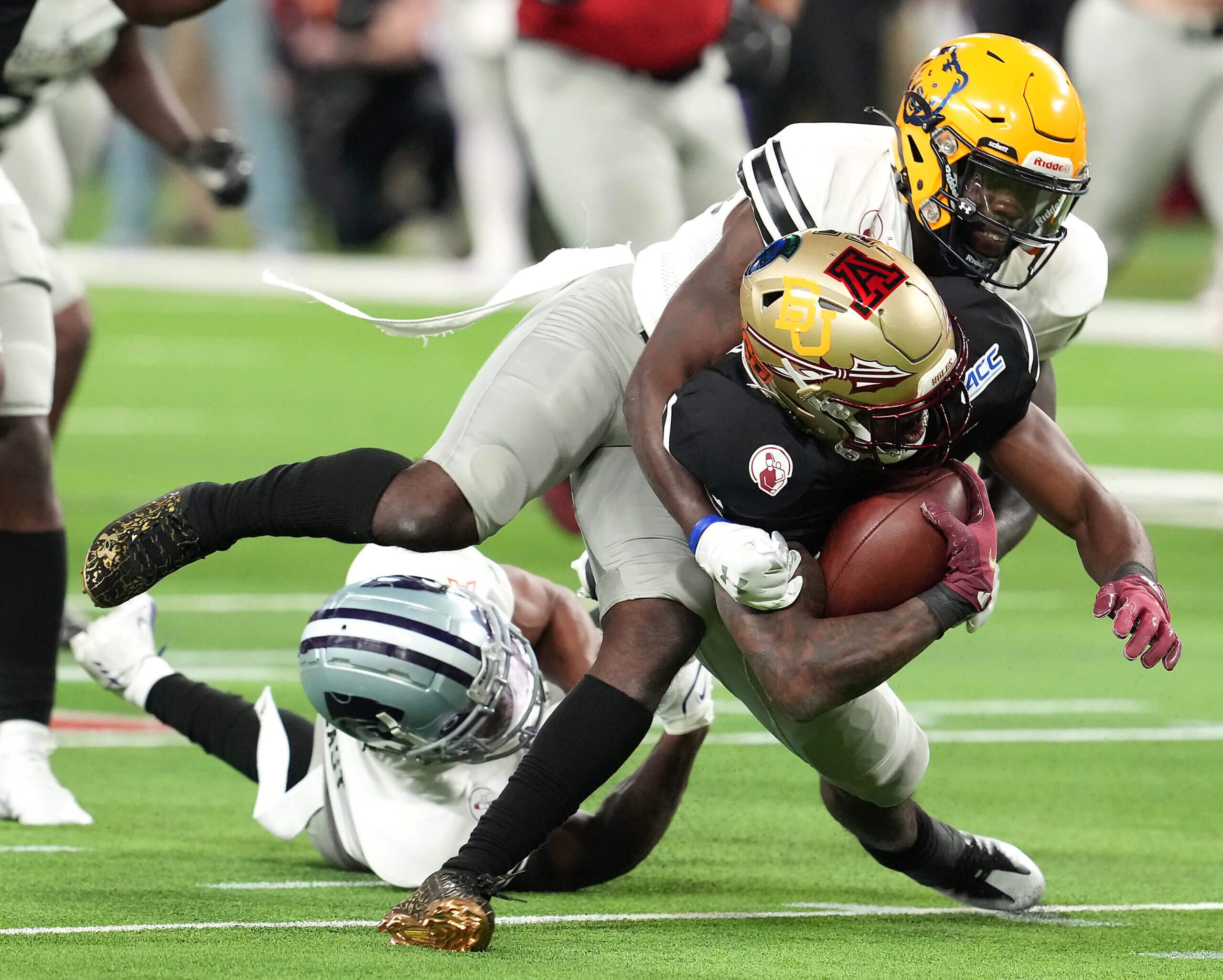 When Koffie was born in a refugee camp in Sierra Leone, his mother could not have envisioned a future in American football. She didn’t know the sport existed.

“We did soccer and track over there,” Agnes Paye said. “But here (in the US), you can be whatever you want and go wherever you want to go.”

But sports would have to wait. The family had more pressing concerns—like survival. Agnes had seen her father killed and her village burned to the ground in the Liberian conflict. She justifiably feared for the rest of her relatives and her unborn child. She, like so many fellow citizens, fled the country, first for Sierra Leone. By the time she reached a second refugee camp in Guinea, where Kwity was born, Agnes had set her sights on making it to America. A grandmother in Providence, RI, agreed to sponsor Agnes and her two boys on their immigration application.

Finally, a way out.

But when Koffie says his journey has not been easy, it’s a statement that has been true even from his earliest days. When the family arrived for an interview with immigration officials, a crushing oversight was discovered: Only Agnes’ name was listed on the affidavit of support.

The situation in the region was so bleak that others were making unthinkable decisions if granted an opportunity to leave. Agnes, who was still breastfeeding newborn Kwity, wondered whether she might be faced with the same gut-wrenching choice.

“People were leaving their kids behind,” Agnes recalls. “And if you went for an interview and your children’s names were not on the list, sometimes they just disqualified the whole family.”

Whether it was an answer to Agnes’ prayers or the mere generosity of an immigration official, the woman conducting the family’s interview, having seen the pain on Agnes’ face and her two young kids in tow, added the children’s names to the application and promptly approved it.

Agnes planned to come to America to make a way for her kids, and upon her arrival, she learned what that looked like. She worked multiple jobs throughout their childhood, often leaving home at 6 am and returning around midnight. At one point, the three shared a single room in a group home. But Agnes pressed on, and her diligence made an unmistakable impression on her kids. For one, it made them vow to do their best to simplify her life when they were able. Kwity did that after signing his $13.6 million rookie contract with the Colts, allowing Agnes to begin on a well-earned retirement.

But Agnes’ habits also taught her boys the value of work, and no one embodies that ethics more than Koffie.

The boys discovered football at a young age, fortunately for Agnes. They used to wrestle each other at home, breaking their bunk bed on multiple occasions. Koffie, full of energy, was typically the antagonist. But in football, the brothers’ paths were never parallel. Koffie never enjoyed the same immediate success as his younger brother. Though Kwity would eventually star at Catholic powerhouse Bishop Hendriken, Koffie found it difficult to gain traction in Providence.

He went to great lengths to attend various camps in hopes of being noticed, traveling by Greyhound bus or riding with Agnes when she wasn’t working her nursing assistant jobs. Overnight trips often meant sleeping in their car rather than spending money on lodging.

“Trying to put myself on the map,” Koffie said.

Frustratingly, nothing was happening. But after his mother had brought him from Sierra Leone to the United States for the chance to pursue his dreams, who was he to give up on those aspirations? Unwilling to be denied, Koffie connected with an aunt in Knoxville, Tenn., then moved in with her at age 16 to attend Knoxville Central in search of more visibility.

Even so, the Division I scholarship he’d sought never came. Koffie spent a post-secondary year at prep school Milford Academy in New Berlin, NY From there, it was on to junior college at North Dakota State College of Science.

“JUCO really humbles you,” Koffie said. “It’s a grind. It’s not flashy. It’s not Division I. You have to take your jersey home and wash it. Nobody really cares where you come from. Everybody’s just fighting, trying to get to Division I, every single rep, every practice, every single game. It was kind of a reality (check) for what life really is.”

Said Kwity: “He would call me sometimes and be like, ‘Bro, this shit is tough.’ I would tell him to just keep going.”

Koffie persevered. The payoff? That one season in North Dakota grabbed the attention of New Mexico State, which finally delivered the Division I scholarship Koffie had spent so many years chasing. He was there for three seasons, making his mark and setting his sights on his next goal: the NFL.

Koffie wasn’t on the NFL’s radar after his time in New Mexico.

When he entered the transfer portal as a potential graduate transfer, he offered an aggressive tackling style and experience against quality opponents like Alabama. What he sought was a coaching staff that could position him to play in the NFL.

Enter Ed McCaffrey, head coach at FCS program Northern Colorado and a veteran of 13 NFL seasons as a wide receiver. Koffie saw Northern Colorado’s offer as a perfect match, bringing his experience to the Bears while giving him the chance to be tutored by someone who knew what it took to last in the NFL. Koffie responded with moments of dominance, like the 11-tackle performance he posted against Eastern Washington last season.

Koffie is still as physical as he was during those bedroom wrestling matches with Kwity many years ago. It’s the part of his game in which he takes the most pride. And he further demonstrated that physical ability when he ripped off 20 bench press reps at 225 pounds during his recent pro day, after training at Landow Performance in suburban Denver. That’s a number more commonly seen from offensive linemen than defensive backs (no cornerback at this year’s NFL Scouting Combine logged more than 18 reps).

“When he comes down to make a tackle, it’s gonna be a collision,” Kwity said. “People overlook him because he’s from a small school, but I feel like the scouts that do the deep digging, they’ll find him.” 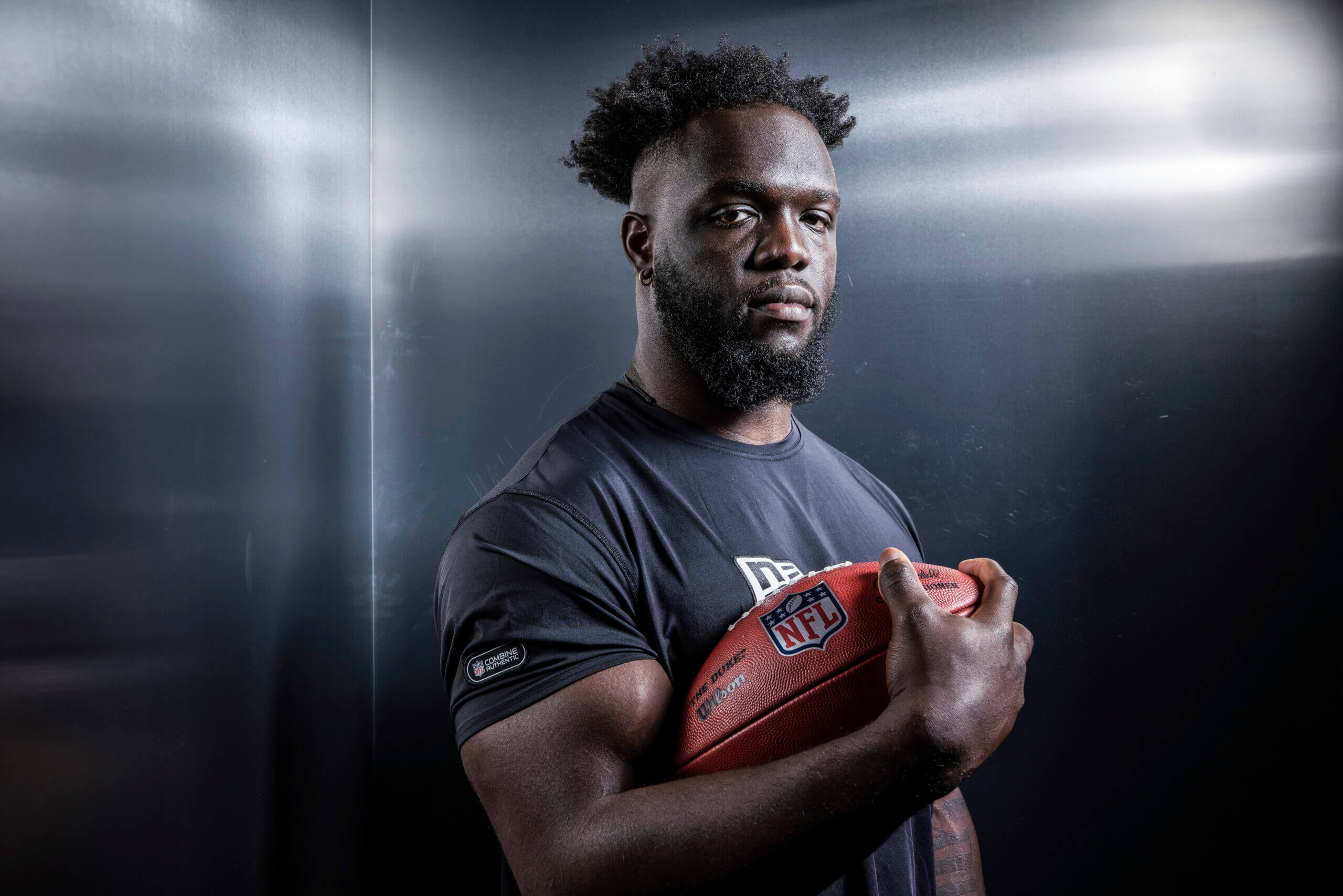 Kwity Paye was drafted in the first round in 2021. Can his older brother also join the NFL this week? (Todd Rosenberg/Associated Press)

The truth is they already have. Koffie’s invitation to the East-West Shrine Bowl, one of the main pre-draft showcases, got their attention. It’s difficult to predict whether Koffie will be drafted. He doesn’t have the blazing speed that pops on film or a big name that will draw eyeballs. But he has something most other prospects, drafted and undrafted, do not: an unshakable will.

And why wouldn’t he? Koffie has already handled so much.