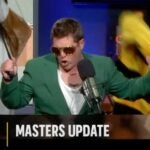 There are many time-honored traditions associated with the Masters, like pimento cheese sandwiches, green jackets and the use of the term bosses.

A new-ish tradition broke out in 2020, and for some golf fans it has turned into a vital part of Masters week. Chris Vernon is a digital host and contributor for Grind City Media; his gigs include an analyst role for the Memphis Grizzlies and host of The Ringer NBA Show podcast.

He’s also a golf fan, and when his unique take on a “Masters update” from the 2020 tournament took off on social media, he gained even more fans. If you aren’t familiar with his “What’s Goin’ on at Augusta,” check it out here. That actually wasn’t Vernon’s first Masters update, it’s just the one that took off first.

“That one blew up,” said Vernon, who was a guest on this week’s GOLF Subpar Podcast. “They always did pretty good and always certainly got people’s attention, but weren’t like mega-viral.”

Vernon says it was a unique set of circumstances that led to the 2020 update gaining steam. Years earlier his Masters updates were just on the radio, but eventually they were filmed in a studio and with cameras. They always did pretty well, but his first-round update from the 2020 Masters has more than 40,000 views on YouTube alone.

Why? As Vernon explains, the pandemic meant more people were inside and everyone was attached to screens. More opportunity to see his video, he says.

“And more importantly, they were looking to laugh about something,” he said. “I mean it’s hard to go back to that point in time, but nothing was funny. Everyone was miserable, everyone was stuck in the house. It was awful. The one that came out because of quarantine and because the Masters was played in the fall, that’s the one that like super broke through. And I have wondered if it had always just been a spring [Masters], would it have broke through in the same way. I suppose it’s possible, but I think we were just right place, right time.”

You can check out the entire podcast with Vernon below.

Josh Berhow is the managing editor at GOLF.com. The Minnesota native graduated with a journalism degree from Minnesota State University in Mankato. You can reach him at joshua_berhow@golf.com.